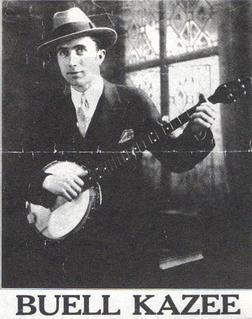 Thanks to Harry Smith's Anthology of American Folk Music I've had the chance to listen to "East Virginia" as sung by Buell Kazee (1900-76).  Kazee, who spent his life in Kentucky, started playing the banjo in public at age five, and later attended Georgetown College, where he studied Greek, Latin, and English.  After giving up playing in public for decades (except for church revivals), he spent many years as a Baptist preacher in Morehead, Kentucky. "East Virginia," an old folk ballad, has been sung by many performers, often with varied lyrics. It is a haunting tale in the way Kazee sings it, more so for what he adds and leaves out.  I offer my own variation.

No music keeps time, not
even a banjo, even if it makes
our foot tap. And when I hear
the firm speed of the banjo
when played by Buell Kazee—
yes, that’s his name--time moves
somewhere behind my head.

Just like the rest of us, Buell
Kazee can't help but go back. His
voice is about something: could be
a murder; could be a baptism. A minister
from Burton's Fork, Kentucky—yes,
there is such a place; I went
back and looked it up—he’s singing
about a boy, OK, a young man, a boy/man,
pushed by that hasty combination
of sex with love. The boy/man is
from East Virginia, a place dark

as a whip. Then this boy/man went
to a place where most of the tribe
once fell, to North Carolina
for a girl "whose name he did not
know." But he did know some
things: her hair was brown,
curly, and she wore a red ribbon
over her breast, and she smiled
when she saw him. Sometimes,
I believe, that's all you want

to know. And Buell Kazee was a
scholar, and he knew that boy/man
now turned old man had more to
tell, leaving Buell Kazee to tell
it—some left unsaid, some
misunderstood, that’s true—yet
the old man wishes he were
now dead, and Buell Kazee
sings: the girl's father said, OK,
get maried; the mother said,

No, it will never happen. Then what are
the rules a boy/man must follow?  He
whispers to the girl/woman in that
place right above her collar:
this is my plan.  Let us take off
on a dark night and leave this god
damn world--my words, I know--
where the sun will never
reach the marrow of our

bones.  And that's it; end of
lyric, just Buell Kazee playing his
banjo. He doesn't tell us
more; maybe they did run
off, maybe they didn't; maybe
the girl/woman was stolen by another
man or trapped by her mother inside
the holler's trap of trees. Or maybe

she died at the hand of god or the hand
of man, one that belonged to her
father on a night of no moon. And then
there is nothing we can do but go
forward, spinning forward, with Buell
Kazee and his banjo, and I keep
my side of the bargain, and
tap my foot of vanity. 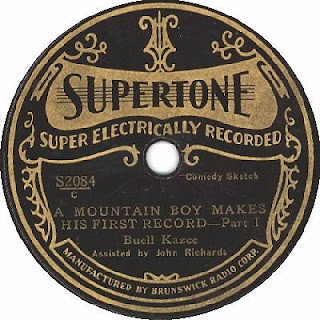 Follow these links if you wish to listen to Buell Kazee . . .

. . . give a banjo lesson:
http://www.youtube.com/watch?v=AgBgfn9S3gw
Posted by Christopher McCabe