DOUBLE EXPOSURE IN A GHOST STATE: PART I 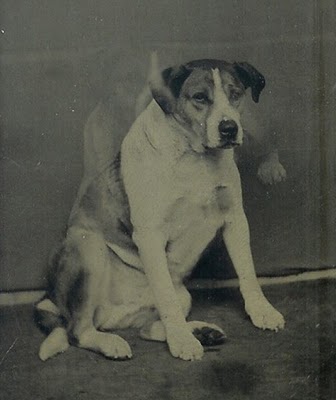 There is a dog sitting at attention.  This dog appears to be brown and white, and a good-sized animal, at least 80 pounds, maybe 100, and muscled. Since we can't tell if this dog is a male or female, we will just note its broad chest, wide enough for Scout--so named by us--to pin a birthday cake to the floor. This baked good is just an after dinner mint to follow the big dog’s main course, a dinner plate of Texas ribs and beans.


Will this dog share with the family terrier? Depends on how hungry Scout is. Scout may want the terrier as a dinner partner, or a side dish.  Scout might eyeball the family SUV if it rolled up the driveway.  Scout could take its silver rimmed wheels in one bite.


Hold on. This dog's name will reveal personality. Maybe it isn't Scout. Instead, this dog is named for a bakery product. People say, "Come here, Cupcake." Or a news anchor. Kim at 11. Or the unambiguous Killer. Or a killer named Sweetie. There is no way to know because we are looking at a photograph and the dog’s name does not appear in a caption, nor on a dog tag dangling from a collar. The owner can offer no help since the owner is no longer with us, we believe.


We have not met the dog on a walk around our block. Never will. We just know the photo was scanned to a website by T. Milo Burns of Indiana, the man who found the picture.  We now learn that Mr. Burns calls it a vintage photo, implying that the dog and its owner have both passed on.


This unknown dog is of unknown breed. A mix of, what? St. Bernard? Shepherd? Labrador? A beagle with an overactive pituitary gland? One moment this dog has a steady gaze, possibly at peace, possibly at wonder. Or is this dog just a sad sack, a senior citizen with a winter sweater wrapped around a canine heart, often self-questioning: should I trust this person before me? Will he rip my canine heart out?


The next moment—a double exposure? can you see it?—the dog has made a decision and takes a gamble on love, offering his paw. That’s a dog you can take home from the pound, give a bath to, name Lovey, and then serve the highest quality of to this animal next to you on the couch. Yes, let’s watch Animal Planet together. So what if this new border sheds.


Then look closer at the photo. And look again. In that double exposure the dog is not offering a paw to shake. The dog is lying down.  That is not a paw raised up, but a hind leg on the floor.  This dog,x a true lazybones. Maybe self-absorbed. Or, quite possibly, though not likely, this dog is the Buddha we are all looking for.


What came first, the steady gaze or the vulnerable gesture to shake or—our mistake, must correct ourselves—to lie down? Who knows? It may not be wise to try to answer that one. Better, for you, as a committed dog lover, to turn away and decide; after all, you and you alone would rather make a lifetime commitment to cats, until you remember that cats have nine lives. A dog in double exposure is probably easier to deal with, even if temporarily confusing.


That double exposure appears to some as a failed image, not a photographic technique. But what would the dog prefer as representative of who he or she--back to gender confusion, again--is? One clean image that has passed through the digital antiseptic of Photoshop, or the accident that yielded the double exposure? The dog's preference: take the latter. Keep them guessing. And eat a biscuit. That’s my guess, for now.
Posted by Christopher McCabe